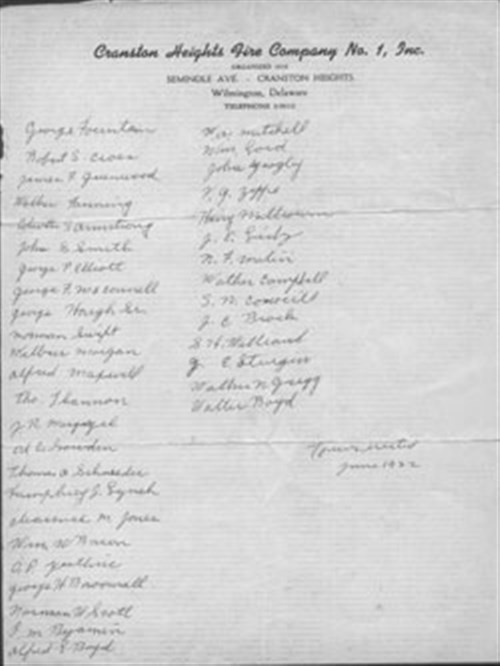 Back in the 1600s the Delaware River, which was purchased from the Indians, was the main route of travel in this area. Back then Wilmington and New Castle were the only two towns. Once they became over crowded residents started branching out. Thus creating places like Delaware City, Newport and Newark.

The town of Newport was given it's name because it was "New" and it was along the water. This gave them the possibility for a Port. It was in this new little town that Mr. and Mrs. Samuel Cranston called home. They not only lived there, but also owned a few businesses such as lumber yards, docks, shipping facilities and fertilizer plants. Not to mention the total of at least five homes. One of the homes was a brick mansion where Roselawn Avenue now stands.

Another gentleman by the name of Darlington Flinn owned alot of what is now Prices Corner. Such property as the old workhouse off of Newport Gap Pike and the land that Acme now sits on.

The Cranstons, who became land poor, started selling off some of their land. Places that are now known as Cranston Avenue, Lincoln Avenue, Roselawn Avenue, and Clayton Avenue in the Cranston Heights development. Back then the land sold in lots of 100 X 50 for a total of $700 each. Customers made payments of $5.00 a month.

The development of Cranston Heights Fire Company can be traced back to five key men. George Fountain arrived in the area on a DuPont ship known as "The Eagle." Mr. Fountain came with the dream of making the community a better place by adding sewers and street lights. James Greenwood, originally from Philadelphia, came to the area to work for DuPont in the powder mills. Robert S. Croes was a City of Wilmington volunteer firefighter. And George McConnell, with his brother-in-law Mr. Lutz who was the Chief of the Wilmington Fire Department.

The gentlemen started the first plans for the firehouse while at gatherings held at Mr. Fountain's clubhouse. Mr. Fountain would go on to become the first president of Cranston Heights Fire Company. He would later prove to be untrustworthy and be kicked out for stealing firehouse funds. It was in this clubhouse that Mr. Greenwood was put in charge of the funds for the firehouse. He also would go on to become president. Mr. Croes, the chairman of the committee, became the first Chief of Cranston Heights due to his knowledge and experience in the fire service. A position he would hold for 25 years.

Due to Mr. Fountain's behavior the meetings were movied to Mr. Croes' barn. In 1920 the first Ford fire engine was delivered in a green color that was repainted red. They would go on to purchase land on Seminole Avenue, but continue to house the fire truck in Mr. Croes' barn. Cranston Heights became the first fire company started outside of a rural town. In 1920 the 1st Ladies Auxiliary of New Castle County was created by Cranston Heights to aide Mrs. Croes.

In 1922 a bell tower was added onto the barn to worn everyone of a fire. Mrs. Croes usually came out to ring the bell herself. Especially since it was right next door to their house and nobody but the wealthy had telephones.

In 1923 the company received it's first white truck, a 350 gallon pumper from United States Fire Apparatus. The reason for the white color was the fact that it was only the primer. The company has had white engines ever since.

Back then the Towne of Newport was the biggest town in the area. At that time the roads where nothing but dirt, with the exception of Newport Pike which had a few stones.

The town of Hockessin would ring the fire siren at 8:00 a.m. and at 5:00 p.m. to notify farmers when to start and end their work day. This changed the original work day of sun up to sun down.

The firehouse was started to better the town and protect it's citizens. But it was also used to bring people together from all over the community. Such functions as spaghetti dinners, duck dinners, and carnivals for the children were pulled together with equal help from everyone.

During this time Newport, Cranston Heights, Aetna Hose Hook and Ladder (Newark), and Good Will of New Castle were the only communities with firehouses.

As the years went by and the company grew older, the firehouse became more family oriented. Alot of sons followed in their father's boots and joined the company. Back then, if a man married into a family of firefighters he would also be expected to join the company.

A member would also have to be a white, protestant, male over the age of twenty-one. This was how it was written in the By-Laws. They did not accept Italians, Catholics, or African Americans.

In the 1920s they had first class uniforms to march in parades. There was even a band that marched with the firefighters.

The older gentlemen ran the administrative (President and Treasurer) end of the fire company. The middle age men ran for the fire line office positions (Chief and the Assistant Chief). And the younger men were known as Black Hat Firefighters.

Back then they might have had 5 or 10 good firefighters, where as today we have a minimum of 20 or 30 firefighters. They only had gas masks to protect them from the dangerous smoke and heat. Today we have a full-face mask called a S.C.B.A. which stands for Self Containing Breathing Apparatus. They were also known to go into fires with just a t-shirt, boots, helmet, and masks. Air masks did not come out till the late 1950s.

Overall, Cranston Heights has come along way over the years. The company owns a long history that every member has become very proud to protect and serve.

We Need Your Support